I’ve based most of my laboratories, lessons and videos off the fact that the Source engine is frighteningly accurate in its depiction of the way objects move under the influence of gravity. In fact, my very first Portal 2 video was about projectile motion. In the video, I was able to accurately predict where I would land based on the laws of physics we know and love in the real world. That alone might be good enough reason for some people to assume the laws of physics in the game are accurate enough. Apparently, I’m not one of those people.

In today’s post, I’m giving an overview of projectile motion. Following this, I’ll present an in-depth analysis of how Portal 2 handles projectile motion and whether or not air resistance is actually a factor for falling objects.

The Physics of Projectile Motion

where Δy is the displacement of the fall, vy is the initial vertical velocity, g is the strength of gravity (g = – 9.8 m/s2 in the real world), and t is the time elapsed. If we assume that our object simply started falling without being launched upward or downward, we can let vy = 0, which simplifies our equation to

At this point, we have a simple equation to determine the vertical distance an object falls based only on how long it has been falling (though it is important to note that equation 2 is only for ideal situations because it ignores air resistance, which has significant effects in the real world). Equation 2 does not include a reference to mass, which indicates that ideally mass has no bearing on the way an object falls, as first proposed by Galileo in the 17th century. This was famously tested on the Moon during Apollo 15 when astronaut David Scott simultaneously dropped a hammer and a feather and watched them hit the ground at the same time. If you were to scour a physics textbook for opportunities to employ equation 2, you’d find problems involving marbles rolling off the edges of tables, packages dropping out of airplanes, and people dropping garbage out of second floor windows. In Portal 2, I’ve found the simplest way of replicating this type of problem is with a cube sitting atop a hard light bridge that suddenly disappears.

In this situation, the object is free to fall. If the Source engine follows the laws of physics correctly, the object should accelerate at a constant rate as it falls and cover more distance per unit time.

Do not be fooled into thinking that this falling object is falling in a parabola by the parabolic shape of figure 1. The figure above only describes motion in one direction, downward. Notice that it’s simply showing a downward change in position that changes more as time goes on. In other words, the object gets faster over time. If figure 1 looks familiar, it should. It’s half of an upside down parabola that most math students create when they graph y = x2 . 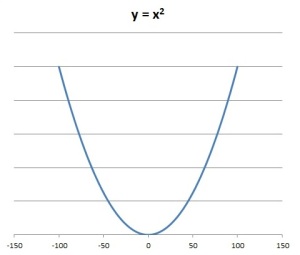 In the real world, objects rarely follow perfect parabolas. Friction, in some form or other, will impede or alter an object’s path. The faster an object travels, the more friction is a factor. Anything built to be fast, whether that’s an airplane, racecar or bullet train, has a sleek profile to minimize friction’s effects. Any child who has stuck her hand out of the window of a fast moving car can distinguish between a non-aerodynamic surface (where her palm is held perpendicular to the wind) and an aerodynamic surface (when her palm is held parallel to the wind).

As an object falls, it feels a constant force of gravity but an increased force of friction. Eventually the two forces equal each other and an object reaches what is called terminal velocity, or the maximum velocity attainable in free fall by an object of a particular shape and size (generally denser objects fall faster). For a human, terminal velocity is reached around 60 m/s near the surface of the Earth.

So, in studying falling objects in Portal 2, we have two metrics we can use to determine accuracy: gravity and terminal velocity.