Over the past two years of Physics with Portals, I’ve gotten emails from dozens innovative teachers around the world who want to teach with Portal 2. And it’s awesome. I love helping out however I can.

Last week, I got an email from Tom Perazzo, a digital media teacher in Santa Clara, California. I got excited. Of course, I was excited that another teacher wanted to give my lesson plans a shot in class. But I was even more excited that Santa Clara is only 10 minutes from my house (and on my way to work)! So I had to ask to drop by to see what his students were doing.

This morning, I signed in as a visitor at Santa Clara HS and stopped by Tom’s classroom. Check it out! 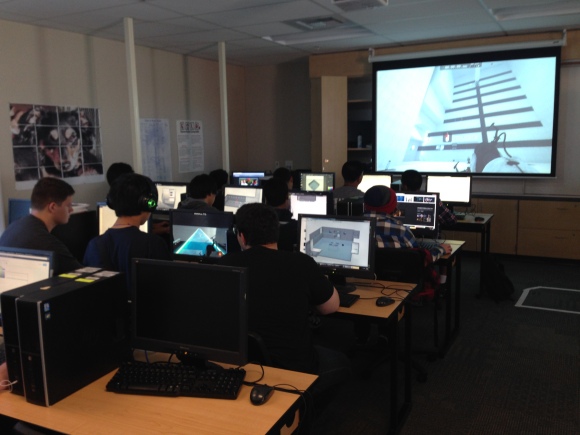 Tom teaches digital media classes, and, as you can tell from his set up, his classroom supports his students well.

His 9th – 12th graders were working on two assignments. Some students were finishing up their Rube Goldberg machines, which they had to design, build and describe on their blogs. Other students had moved on to a physics experiment, roughly pulled from my lesson on forces using aerial faith plates. You can see Tom’s example experiment on the big screens.

Students then recorded the maximum height of the cubes by employing the same alternating black and white panels strategy I use. Once they finished (probably in the next class?) students were to graph their results and, hopefully, start making predictions about how high cubes might fly.

Any other intrepid teachers out there? I’d love to hear what you’re up to!